Twice a year, 20,000 whales pass by Oregon's Coast on their migratory route in December and March. Read on for elevated vantage points perfect for Oregon Coast whale watching. 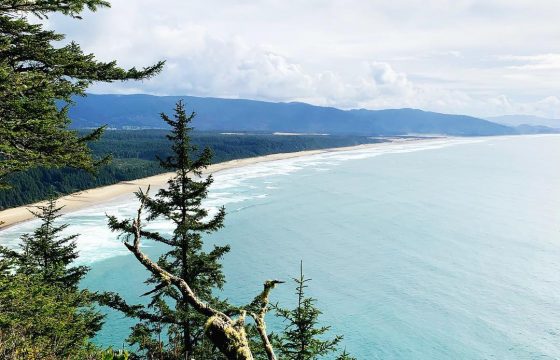 Part of the Three Capes Scenic Loop, Cape Lookout is home to a trail that follows the headland for more than two miles with plenty of viewpoints along the way. 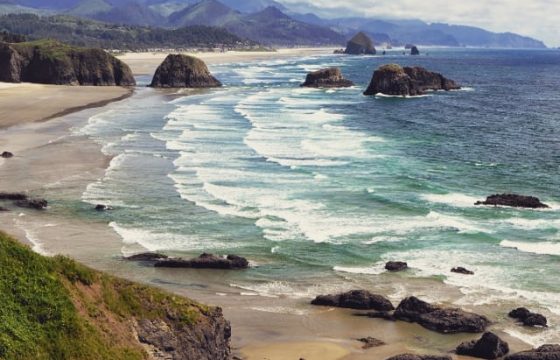 A popular spot for its scenic coastal views with and without whales. Ecola's entrance road from Cannon Beach winds through a lush Sitka spruce forest before leading to a parking area with access to a picnic area on a grassy bluff and trails to the beach and cliffside viewpoints. 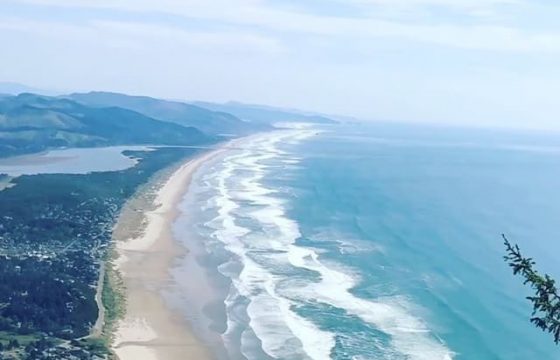 Stop at the historical marker along Highway 101 towards Manzanita. The multiple highway turnouts are lined with low rockwork walls. Hikers can climb the nearby Neahkahnie Mountain trails for even higher views. 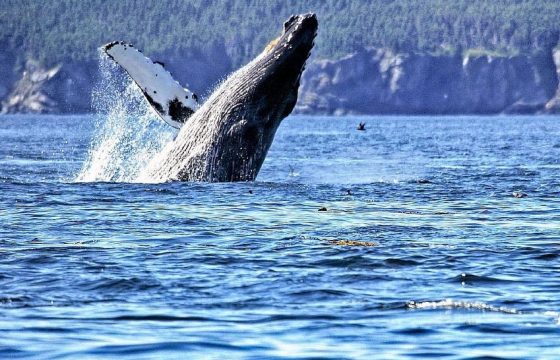 "Whale Watching Spoken Here" is put on by Oregon State Parks every migratory season. During the peak week of migration, volunteers are here helping visitors sight whales off the headlands. See all the volunteer-staffed locations!

As the weather cools every winter, more than 20,000 Gray whales migrate south to the warmer waters off of Baja Mexico. In the spring, they will migrate back up north to Alaska, passing along the Oregon coastline again to the delight of whale watchers. If timed right and the skies are clear, getting a glance at whales passing by can be a breathtaking experience. Approximately 30 whales migrate along the Oregon coast every hour during peak southbound migrations, and about six pass by each hour during the northbound migration.

Although Gray whales are generally about five miles off of the shore, they can be identified from afar by their spouts as they rise to the surface. Since these spouts shoot up around 12-feet high, they are easy to identify on a clear day and can be viewed even closer with the use of binoculars. If you’re lucky, you may even see a Gray whale launch out of the water to perform a breach!

You should be able to see whales all along the North Coast during migrations, but there are three key destinations to be aware of that are staffed by volunteers during Whale Watch Weeks in late December and late March. This includes Fort Stevens State Park, Ecola State Park, and the Neahkahnie Mountain Historic Marker off of Highway 101. Especially from Neahkahnie Mountain (one of the highest points on the Oregon coast), visitors have expansive views of the ocean which makes it an excellent vantage point for spotting Gray whales as they migrate.

But even from grassy dunes by the beach or from beachfront balconies, you should be able to find whales if you are looking for them during their travels. Even during non-migration seasons in the summer and fall, approximately 200 whales reside in the waters off of the Oregon coast to feed.

Is there whale watching on the Oregon coast?

Yes! The Oregon coast is a premiere destination for whale watching, with an abundance of Gray whales traveling up and down the coastline every year.

When is whale watching season on the Oregon coast?

What to wear whale watching at the Oregon coast?

If you are whale watching on the North Coast during the winter months, bring plenty of warm clothes and rain gear to keep you comfortable as you view whales passing by from the shores. Weather in the spring is generally more pleasant but unpredictable, so bring layers to account for sun, wind, and rain.

Where to go whale watching on the Oregon coast?

While the entire Oregon coast has many whale watching destinations to choose from, there are a few key spots on the North Coast. This includes Fort Stevens State Park in Astoria, Ecola State Park between Seaside and Cannon Beach, and the Neahkahnie Mountain Historic Marker off of Highway 101. Cape Lookout State Park also offers impressive viewpoints that can be great for catching a glimpse of the whales.

This website uses cookies to improve your experience while you navigate through the website. Out of these cookies, the cookies that are categorized as necessary are stored on your browser as they are essential for the working of basic functionalities of the website. We also use third-party cookies that help us analyze and understand how you use this website. These cookies will be stored in your browser only with your consent. You also have the option to opt-out of these cookies. But opting out of some of these cookies may have an effect on your browsing experience.
Necessary Always Enabled
Necessary cookies are absolutely essential for the website to function properly. This category only includes cookies that ensures basic functionalities and security features of the website. These cookies do not store any personal information.
Non Necessary
Any cookies that may not be particularly necessary for the website to function and is used specifically to collect user personal data via analytics, ads, other embedded contents are termed as non-necessary cookies. It is mandatory to procure user consent prior to running these cookies on your website.
Analytics
Analytics cookies help us understand how our visitors interact with the website. It helps us understand the number of visitors, where the visitors are coming from, and the pages they navigate. The cookies collect this data and are reported anonymously.
Performance
Uncategorized
Advertisement
Advertisement cookies help us provide our visitors with relevant ads and marketing campaigns.
Save & Accept